First you gotta soak your soybeans. There's a whole time and tempurature curve involved. Just soak them over night. You want them to be uniformly hydrated and crumble easily between your thumb and finger. I discarded the soaking water. You'll want to puree them as fine as possible in a blender. Remember when adding your water to the blender to blend the beans, you need to ration it. Since I'm making block tofu, which calls for light soy milk, I can only use 1.33 cup of water per ounce of dry soy bean. In this case, I'm allowed 21 cups of water for 16 oz of soybeans. It'll take a few minutes to get the bean puree, or go, fine enough. The first half of my beans weren't pureed as fine as they should have been, and I think that impacted my tofu yield. Pour your go into a big pot, and proceed to cooking. Some folks have you already heat part of your water ration in the pot while you puree the beans. This has the advantage of speeding up your cooking time and limits the soy's 'beany' taste because you are allowing the enzymes that you released during blending less time to work on the soybean's oils and proteins. 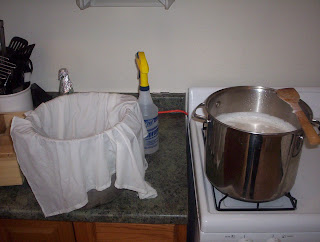 Here's my set up. The spray bottle is filled with plain water. I use it to spray down the foam when I boil the soy milk.

I used the 'mainland' method for making the soy milk. Since I already had to use the big stock pot, foam ups weren't going to be a problem. In the 'mainland' method, the go is cooked all at once, and then pressed to yield okara and soy milk. You have to boil the go for three foam ups, and then turn the heat down and simmer for 5 minutes. It foams up fast, and it can catch you unawares. The foam almost got me. 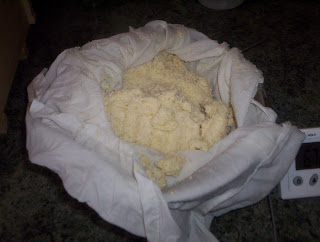 Here's the okara after pressing. It's surprisingly fluffy. Okara is one of the pay offs from making your own tofu. It comprises about 17% of the soybeans protein, so it's a shame to waste it. Posts on what to do with it are forth coming. 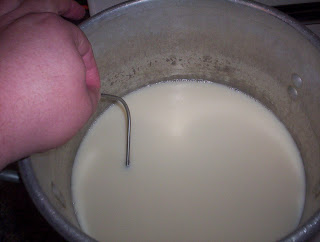 Here's the finished soy milk. I'm checking the temp to see if it was hot enough to coagulate. The cooler it is, the more coagulant and time you might need.